What an amazing season.

Many friends gained, many techniques learned, many new tracks and layouts driven. I cannot begin to recognize how blessed am to have someone in my town that saw some potential and lent much more than a helping hand. Without Jim Guthrie, Brian Dewitt and Car Crafters, this entire season would not have existed.

So from the bottom of my heart, thank you guys. You made a dream become a reality.

This was my rookie season competing against some pretty amazing drivers. While New Mexico is a super fun place to drive, we don't have the population or the scene to kick things to the next level. That's where Justdrift comes in. They have been churning out FD winning drivers for sometime now, and (yet again) I cannot begin to describe how awesome the entire crew at Justdrift is. From the crew to the judges (Charlie, Bomac, JTP, Taka and everyone else), the entire season was full of positive encouragement, feedback and being pushed to the next level. If you live in cali, like drifting and have not been to a Justdrift event, there is something seriously wrong with you. Go. Go now! 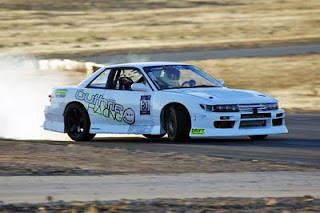 Round 4 was another learning experience and was set up like a mini Road Atlanta. High speed, long slide entry into a 90 degree left hand turn, followed by a late apex right hander, then a long sweeping left back to an inside clip and out the starting straight. Everyone driving seemed to be having issues during the day, but once qualifying hit, it was a whole other story.

I was also feeling a bit meh after practice and the qualifying runs were all at night. My first run, i entered at some random spot I had not entered near all day, and took out both inside clipping points at the entry. I also managed to knock my brand new gopro off with the clipping point. awesome work Dan. Luckily those things are resilient as hell, and it looked like nothing had happened to it. Sadly it was off, so no epic footage from that. Mike Bolanos was nice enough to record some clips from the judges area, so thanks for that!!! Ill be uploading those soon.

My second run was one of my best of the day, solid entry, hit most of the clips, but could have been a bit more aggressive with angle and speed. This run would net me 9th place in qualifying as in my 3rd run i tried to extend the entry way too long and basically came to a stop. Since there were only 16 drivers at this event, I was pleased to say I made top 16 lol.

First battle was with Jason Kim, rad driver, who was currently (and remained) one spot ahead of me in the rankings. He spun on his lead run, and I sloppily finished my lead run to take the win. My 2nd top 8 of the season put me against Mr. Smooth / Mustache, Ryan Bell. I knew this was going to be a tough battle as Ryan is always set on destroy mode. He lead first and I had one of the best following runs I have ever had, but fell off point towards the end of the track and didn't stick as close as i could have. On a side note, his tire folded in half and was sticking out about 8 inches from his rim every time he transitioned to the left. It was one of the craziest things i have had this season. He stuck it out like honey badger and finished the run. 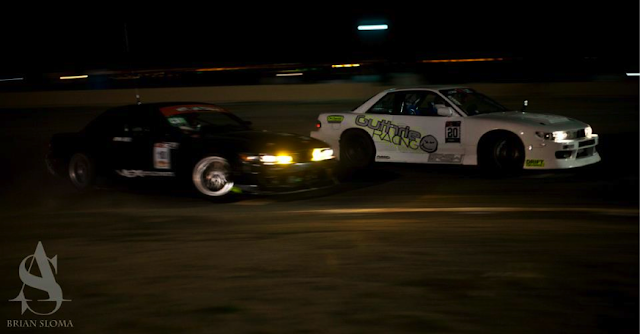 My lead was ok, but ryan stuck to me like glue. He and his mustache would move on to top 4. Awesome battle, and thanks to Ryan to giving me pointers and tips all season. He is one hell of a guy.

The top 14 ended up like this, so congrats to you all for kicking much ass!

The rest of the battles were super fun to watch and the the new FD drivers were crowned. Congrats to all 6 of you, you killed it this season, and I cannot wait to watch you in FD!


I hope I have the pleasure of drifting with you guys next year, if not, this was a summer I will never forget.