Holy smokes, I have been a slacker with this update... Been busy with work, and actually went to the lake for the first time in like 10 years. Anyway, back to the topic at hand.


This was probably one of the funnest events all around, on my favorite track of the Top Drift tour, Horse Thief Mile. Charlie, Mike, Justin, Odi,  and the whole Just Drift crew will blow your mind with the amount of awesome they produce at events. Go to one and see for yourself. Huge thanks again goes out to Brian Dewitt, who build a rad car, and has been kind enough to let me beat the crap out of it for 3 events now, you rock buddy. More thanks to Jim Guthrie and Car Crafters / Guthrie Racing for getting me out to the events, Radium Engineering (who has some of the baddest parts out there), Grip Royal, Performance Fuel Injection, Pulstar Pulse Plugs, and Z-4 Graphix for helping a young buck out along the way. I hope I am making you all proud :)

Thursday
We started off the trip by taking 20 hours to get to cali... We broke down outside of Needles CA, with a busted clutch fan. We limped the truck into town, and Brian and Mikey threw a fix on it that got us to Lancaster for the night. We hit up the Yard House, had some delish dinner and brews, then crashed out for the evening.

Friday
Got to spend the next day at willow, while Jim tuned in the Mustang, I took a few laps around HTM and some around Balcony as well. I didn't want to spend 160 bucks to have full track time, so I kept the driving that day to a minimum, and mostly rode the scooter around. Who knew there was a mini bike track out there. Hit jumps like a boss. We took off and had another epic dinner and crashed out again.

Saturday Practice
We slept in a bit, missed the practice days drivers meeting... Got the skinny, Jim was in group A and I was in group C. This sure made it easy to have people watch to tell me how bad I was messing up. Practice was going good, and everyone seemed to be killing it. I was short on tires, so I didn't get to practice as much as I wanted to, and actually ended up taking a good long nap until brian awoke me to attend the worlds first Lexus SC300 tandem train party extravaganza. There were a total of 7 SC badged cars, plus a mk4 supra, bringing the total for the chassis up to 8. 6 of them were actual Lexus sc300 body styled cars, and Pat Mordaunt's SC430. This was the largest tandem train I have ever driven in, and it was a freaking blast. So many boats, so little time. I think I learned more about tandem doing that, than I have in the last 4 years of me drifting.

Needless to say, it was good to see some familiar faces, meet new ones and just have an awesome time with amazing drivers and staff.


Sunday Competition
Early morning was early... We were up at 6:30am, and out the door by 7 to be at the track for drivers meeting at 8. Got to the track, got pumped up applied some stickers and changed to a new set of tires for the days practice session. My good buddy Andy Barrow was out with us this time, and he spotted for me like a boss, I cannot believe how much having a good spotter helps you fine tune your runs in. Thanks a ton Andy :)

Practice felt awesome, and other than getting my tiger woods on with a hay bale, I managed not to run into anything or anyone else the remainder of practice. I had my qualifying run in my head, and ended practice early to watch everyone else.

There was another drivers meeting to go over what the judges wanted to see in qaul. and then the long wait, as there were close to 25 cars ahead of my run group. I watched as most of the guys in group A made some epic runs and started to get a little bit worried. It seemed as though everyone had on their A games as I watched people in full destroy mode.

I finally got my turn. My first run I was a bit off the first outer clip, but nailed the rest of the course spot on. My second run consisted me railing the 1st outer clip, then dirt dropping the 2nd. My third run was pretty much spot on for what I was doing in practice, didn't get close as I wanted to the 1st inner, but hung tire off the track on the 2nd outer without dropping tire. Pumped. Watched the rest of qualifying and headed off to the drivers meeting with mixed emotions about how I did. 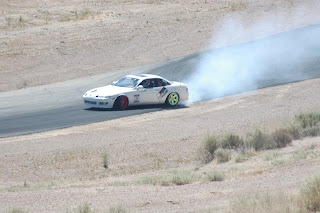 Tandem - Top 16
My first battle was against Adam Knapik in an s14. The dude was super consistant all day, and was to be tough competition. I lead first, and ran out of gas at the bottom of the hill, lost drift and straightened out, but caught it and finished the course. Adam was right on my tail the whole time. I knew I had to get nasty to overcome the gigantic mess up I had laid down. Bottom of the hill again, on Adam's lead run, he went off track, I was hoping for a one more time, as we both messed up, but the judges gave the round to me. Not the best way to win a round, and I can't wait to battle Adam again soon.

Tandem - Top 8
The next battle was up against JD vet Jason Kim. Rad guy, and rad driver. I can't remember if I lead or followed first, but on my lead run, Jason went off track at the bottom of the hill, granting me the pass to top 4. Don't have enough nice things to say about Jason, and I love driving with him as well.


Tandem - Top 4
My top 4 battle was with Tyler Wolfson. I've had the pleasure of knowing him for most of last season, plus these two events. I love that guy. When his car is actually running for an entire event, he absolutely kills it. We had some of the best tandem of my short drifting career, as I knew I would have to follow like a beast to get the best of him. I pushed the car to it's limit and kept up, stayed close everywhere except the downhill section, and prayed I was transistioning at the right times due to the amount of smoke he was making. Get back to the top, and the one more time was called. Another almost identical set of runs were laid down, this time with me moving on to top 2. Tyler, thanks for some of the best runs I have ever had. Let's do this again asap. Also, check out the blog post about this round from them here: http://wolfseitz.wordpress.com/2012/05/31/2012update/


Tandem - Top 2
Forrest Wang... What can I say, the dude is a machine. I followed first, and due to the power differences of the cars, I pushed a little too hard on entry, and almost rammed him. I was full on foot and e-brake and had to make a correction. By that time Forrest was all the way down the hill, and I couldn't catch up. On my lead run, Forrest was on me like glue and I could hear his turbo trying to suck me out of my seat the whole time. Well done, awesome to battle with you sir!

The 2nd place finish put me atop the JD standings for the season, a pretty damn awesome feeling. Just need to keep it up for 2 more rounds.

Mike Bolanos, thanks for keeping everyone super pumped up at the start line. Your antics make things so much more fun! <3 it

Thanks to the judges, Hiro Sumida, Justin Pawlak, and Odi Bakchis for the feedback and support, you guys rock.

Congrats to Forrest Wang for taking 1st, and Tyler Wolfson for taking 3rd!

The standings after 2 rounds.