First off, I apologize about the delay, I have been waiting for other articles to publish about the final standings, videos more pics etc... but it seems as though they all dropped the ball.

What a weekend. What a week leading up to the weekend. For starters we weren't able to finish my car on time, so just like last year, I was lucky enough to have a car to borrow. This time it came from Brian Dewitt in the form of a rad Lexus SC300 with a 1JZ on stock twins and 8psi. Huge thanks again to Jim Guthrie and Car Crafters for getting me out to the event :)

We threw my car aside, and thurs. night, Brian had caged his SC in 4 hours. Again, this guy is amazing. We added a fire extinguisher, packed the rig, mounted a ton of tires for Jim and headed off to Willow Springs for TOP DRIFT round 1.

First off, there were 59 registered drivers, around 10 had car issues and couldn't make it to qualifying. Mike said this was Just Drifts largest turnout!!!

We pulled up to the track on a sunny saturday morning, and it wasn't even cold... There were rumors of rain for sunday, but for now the weather was perfect. Charlie announced the drivers meeting, and we all cruised over. After cracking a few Ossifer (as Mike Bolanos calls it) Dan jokes, Charlie let us know the details, and separated us into our run groups for the weekend. Jim was in Group A, and was driving the mustang from motorcycle vs car drift battle 2. I was in group B and was in the Lexus.

Practice went well, I had only driven Brians car 2 quick times before this event, and it felt rock solid. I was able to quickly figure out the line I needed to be on, and felt really good about it all through practice. Brian builds epic cars... Everyone was driving well, and it seemed as though qualifying was going to be super tough, as they were only taking the top 16 out of the 49 drivers left.

Photos below by Roger Smith

Sunday morning rolled around and we had 1 practice session before qualifying. We made some changes to tire pressure, and the car became a smoke monster. I was able to put it exactly where it needed to be with minimal correction and it was billowing smoke. All the morning practice sessions were in the dry, but there were some nasty clouds looming in the distance.

The drivers meeting before qualifying was held and the drops started... not much at first, but more and more as the time came to stage for qualifying.

Group A probably had it the worst... The rain was heavy enough to make the oil and tire residue on the track turn into slime, but not hard enough to wash it all away. I sat in the shack shivering with a ton of other people and watched as car after car spun all 3 qualifying runs. Sadly Jim spun twice in the stang, then the motor bogged out coming up to the building and he lost drift. Out of group A's 20 or so cars, only 6 completed runs.

The heavens parted and the rain stopped for group B for some reason, the track was still slick as all get up, but not getting worse. I watched as a few guys from group B completed laps, and I was up. My first run was super conservative, and I actually lost drift near the building... I was understeering. Added a few PSI to the tires for run 2 and completed the lap. 3rd run was close to the clips, but could have been better overall.

The rain really picked up again for group C and many more spun all 3 runs. 23 out of the 49 actually ended up putting down a run that scored points. I ended up qualifying 8th, and Erik Hill took top honors qualifying 1st. 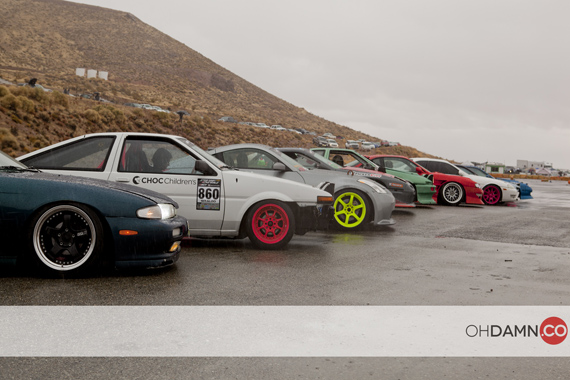 Top 16 battle number 1 was between myself and Adam Levi (sexy red S14). I lead first, and though I had a decent run, seemed like Adam was on my so I knew I had to put down a mean following run to win the round. Sadly, Adam sucked water through his intake and his car died on the approach to clip 1. I moved on to top 8.

Top 8 Battle was vs the number 1 Qualifier Erik Hill - I won, but I'm not sure how I really couldn't see much as the rain was heavy, and the fog inside was limiting. Needless to say I mad my first top 4!! 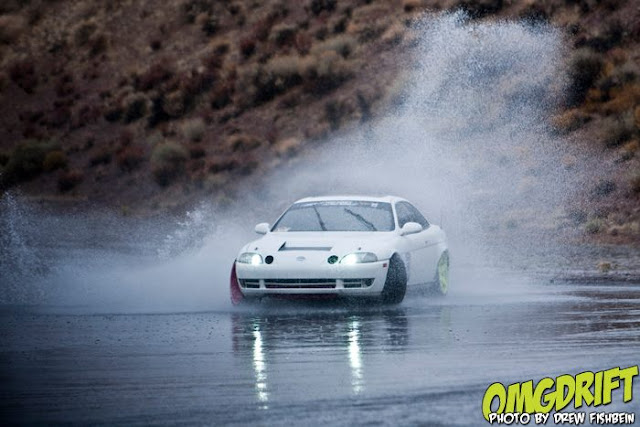 Next battle was up against Danny Giraldo in an 4AGE Turbo'd 86. My lead run was ok, and he was on me like glue. My following run was good until the building, then he just walked away from me like I wasn't even there. Well done to him and congrats on 2nd place!!!! 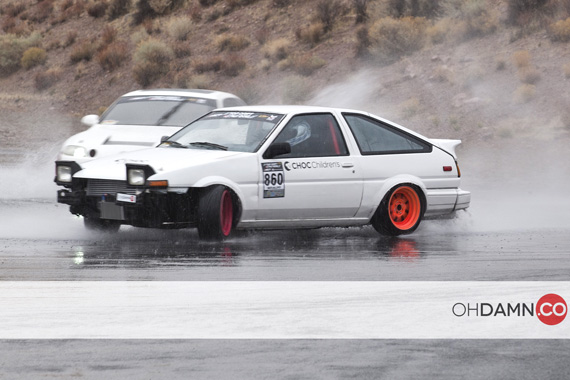 I battled Alex Villabrille for 3rd place, great battle as always, but sadly on his following run he spun behind me on initiation giving me the 3rd place seat. Well done sir and congrats on 4th!

George Kilada and Danny battled for first, and George came up with the victory, you guys killed it! Very Well deserved George :) 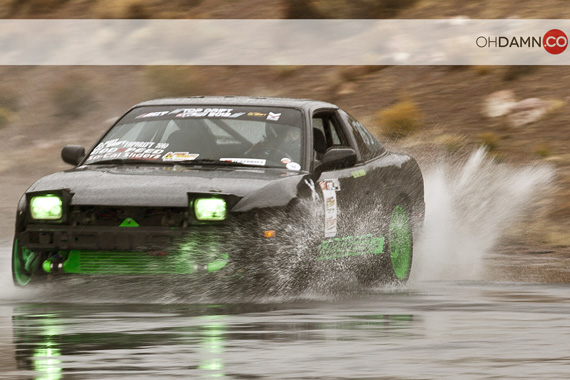 I was super happy to get my first ever top drift podium, having never drifted in rain, in a borrowed car. It felt really really good to be up there and snag a trophy, Replay XD camera, and 60 bucks towards HPS hoses :) 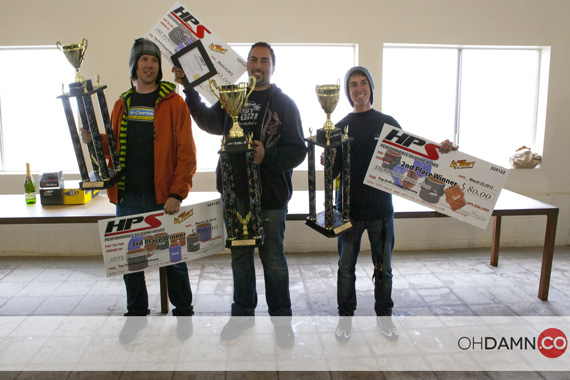 Overall, one hell of an event put on by Charlie and the Just Drift Crew, thanks to the fans and judges who endured the cold to be out there with us.